A cold and dreary Saturday morning weather wise, but still a good morning as I woke up on the green side of the grass…. 🙂 taking a break from getting hobbies, projects, etc. set up for the winter doldrums, including a winter menu… and what better way to enjoy a wintry type day than to combine some crackers;

Some chopped up smoked sausage;

And one has a hearty vegetable soup that warms the tummy and body on a cold wintry day;

Spent most of last week putting final touches to the outdoors, getting ready for winter..did cover the pond with clear, plastic sheeting (helps prevent the pond from freezing solid and protecting the goldfish over the winter)…

It was a good thing I got the outdoors finished for I woke up Thursday morning and not only did ole Jack Frost come calling, but ole Man Winter also… had to scrape the windows on the auto…

And with Freeze Warnings out for tonight, there is no doubt that ole Man Winter is giving us the hint that he is in town… but I am as ready as I can get, so bring it on… 🙂 and with the winter doldrums, will also work on bringing closure to the past (while saving memories) and continue to look to the future, building a path to follow while exploring change… and venturing into a world least traveled, looking forward to, with excitement, at what the future will bring, what Fate has instore for me…. 🙂 believe Mark Twain said it best;

“Twenty years from now you will be more disappointed by the things you didn’t do than by the ones you did do. So throw off the bowlines. Sail away from the safe harbor. Catch the trade winds in your sails. Explore. Dream. Discover. And gain knowledge of yourself and the world.”

And so, using some encouragement from as poem by Hollianne Boucher;

Time flies, and memories fade.
People change and new friendships are made.
Only the true remain forever at our side.
Eventually the disappointment and pain will subside.

It is all about the journey and what has yet to come.
Life is what you make of it; you are what you’ve become.
Life is too short to hold onto regrets.
Forgiveness is key even though you may never forget.

Cherish the good and remove the bad.
Some people don’t realize till it’s gone what they’ve had.
Moving on is a way of life.
There will always be obstacles, pain, and strife.

You must believe that you are strong enough to fight.
You have to believe in yourself to do what is right.
Always do for YOU no matter what you do,
Because in the end the only one who has your back is you.

Never be afraid to take a stand,
And always be willing to lend a helping hand.
A little bit goes a long way.
All it takes is a smile to brighten someone’s day.

Your chance to live is now, so what are you waiting for?
The world is yours for the taking and so much more.
Endless possibilities are forever at your disposal.
The chance to live another day is life’s golden proposal.

Never let anyone tear you down,
And never let anyone steal your shine and make you frown.
So will you sit in the shadows and let darkness win again?
Or will you rise up and make the light your friend?
(Hollianne Boucher)

And after briefly browsing the news, I would like to join the New Seekers and teach the world something different besides greed, conflict, extremism, etc…

Have the days activities done for the most part, thought I would pop in and share a few thoughts…. have been working outdoors preparing for winter while keeping an eye on the calendar as one day ole Jack Frost will be making his presence known… 🙂 nature has the same thoughts as with creatures heading south or finding places to hibernate for the winter, it has grown quiet in the backyard and gardens… mainly just the little sparrows hanging around at the moment…

But the little sparrows like it because there are no large birds to bully them around, just have to keep a eye out for an occasional hawk… also bird seed goes a long ways these days… 🙂 have been doing some preparing for myself…with changing everything around in the house, there is no real room for a tall, large Christmas tree…and the old artificial tree was getting a bit worn after years of use…so came up with the idea of using parts of the old tree and putting on the dining room table… 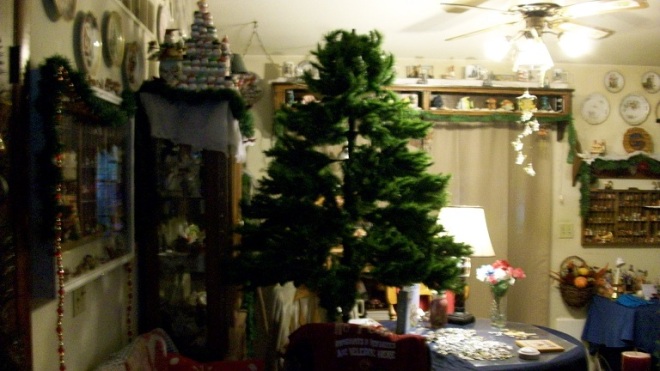 When ready to decorate, will disassemble and put together with decorations… also instead of blogging this weekend, did some errands and got a flu shot..picked up supplies and then Monday decided to do some cooking for putting in the freezer…bacon and smoked sausage here..

Had an assortment of other items and also prepared the weeks dinners to put in freezer and take out as needed..had a bit of a mess multi-tasking.. 🙂 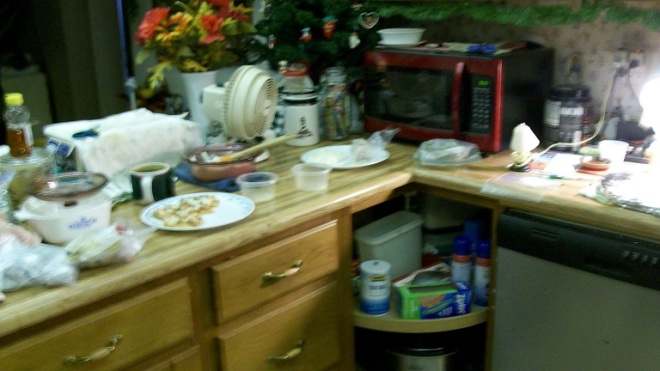 So that has been pretty much the story for the week, mostly ready for winter here…now going to chat a minute about the to paths, one most traveled and the one least traveled..

When my wife passed away a couple years ago, I found myself with a decision to make, which path to take…of course, one would assume the path most taken, BUT..while there are good things on that path, the path is also rife with greed, cynicism, hate, anger, extremism, etc in both religious, economic and social ideology…slowly becoming all that the Founding Fathers of this country came to North America to get away from… a path where it is becoming increasingly difficult for one to realize their dreams, to be themselves, different…

The path least traveled is the opposite.. No social pressures, one can be oneself, to be recognized and respected for who they are and what they feel, being different without fear of being ridiculed, follow ones dreams…while originally not intended to be a philosophical poem, the poem by Robert Frost “The Road Least Traveled” is used as such;

Two roads diverged in a yellow wood,
And sorry I could not travel both
And be one traveler, long I stood
And looked down one as far as I could
To where it bent in the undergrowth;

Then took the other, as just as fair,
And having perhaps the better claim
Because it was grassy and wanted wear,
Though as for that the passing there
Had worn them really about the same,

And both that morning equally lay
In leaves no step had trodden black.
Oh, I kept the first for another day!
Yet knowing how way leads on to way
I doubted if I should ever come back.

I shall be telling this with a sigh
Somewhere ages and ages hence:
Two roads diverged in a wood, and I,
I took the one less traveled by,
And that has made all the difference.
Robert Frost

There are no crowds, no societies, no ideologies to be shackled to…as my daughter would say “it is what it is”, but like Robert Frost, I chose the path least traveled and it has made all the difference… the to paths may cross from time to time and occasionally I will browse the other path, but I stay on the one least traveled and follow the horizon…as Louisa May Alcott said;

“Far away there in the sunshine are my highest aspirations. I may not reach them but I can look up and see their beauty, believe in them, and try to follow them. “

And speaking of the path, believe I had better close and finish the day, more rainbows to chase and flowers to check out… 🙂 but I shall return again one day, Fate be willin’ and the creeks don’t rise…

Here are some thoughts from the Seekers…

Having a laid-back relaxing Sunday resting up a but in preparing for chores, etc next week.. thought I would pop in briefly and share a few thoughts before closing and settling down to read a bit with the Kindle… puttered around the house and gardens for a bit, checked the mosquito cups…

Have to put screen wire around the cup to keep critters from drinking out of the cup… 🙂 the cups are for collecting mosquito eggs…I made them using Ziploc containers, a plastic Solo cup and brown coffee filters… I have four of them and collect the filters every Monday, let dry and then using the USB microscope, I check to see if there are any eggs… here is a picture from last week… 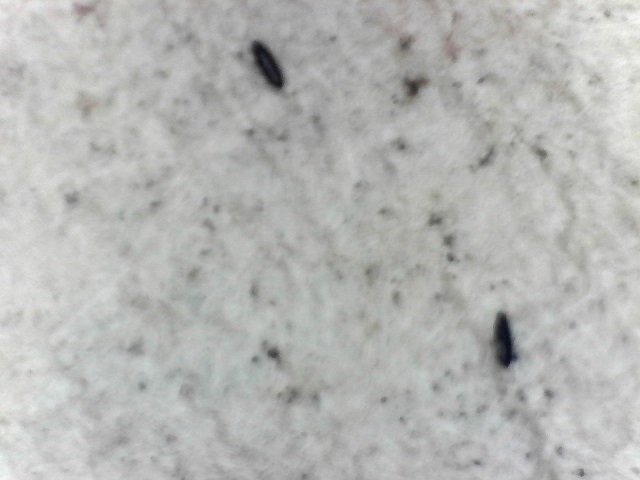 If there are any eggs, I count them, log that in and then seal the filter in a Ziploc bag and send it to the USDA in Kansas and they will attempt to hatch the eggs to determine the type of mosquito present…that finished, I decided to get the flowers ready for the cemeteries on Christmas… easier and cheaper to “roll my own”… 🙂

After that and other chores, I spent the rest of the morning stocking up on fingernails, again, cheaper to “roll my own“… 🙂

So, finished all that, had a bite of lunch and now sharing a few thoughts before venturing on down the path least traveled… had a tragedy the past few days out in Vegas.. people dying for no justifiable reason..dying because someone would rather see a innocent creature die than give up part of his/her right to go on a N.R.A. ego trip….so sad.. 😦 don’t have any guns I my world any more, there is no place for guns on the path least traveled…

Leaving the dark side, sharing some thoughts from others about moving on, starting over, about living a life…

Making a new start
Is like planting a garden…
It starts out slow at first
but with work, a little sunshine
and some rain now and then,
It can blossom into something beautiful
(Author unknown)

When things go wrong, as they sometimes will,
When the road your trudging seems all uphill,
When the funds are low and the debts are high,
And you want to smile, but you have to sigh,
When care is pressing you down a bit
Rest if you must, but don’t you quit.

Life is queer with its twists and its turns,
As everyone of us sometimes learns,
And many a failure turns about
When they might have won, had they stuck it out.
Don’t give up though the pace seems slow,
You may succeed with another blow.

Often the struggler has given up
When he might have captured the victors cup;
And he learned too late when the night came down,
How close he was to the golden crown.

Success is failure turned inside out
The silver tint of the clouds of doubt
And you never can tell how close you are,
It may be near when it seems so far;
So stick to the fight when your hardest hit,
It’s when things seem worst that you mustn’t quit!
(Wade Watts)

That being said, going to leave now and enjoy the rest of the day, toes up and reading a book… 🙂 but I shall return again one day, Fate be willin’ and the creeks don’t rise…

Yes, starting a new beginning, a new life and it being my life I am the only one who can live it, so with a little help from Andre Rieu, I am going to do it My Way… 🙂