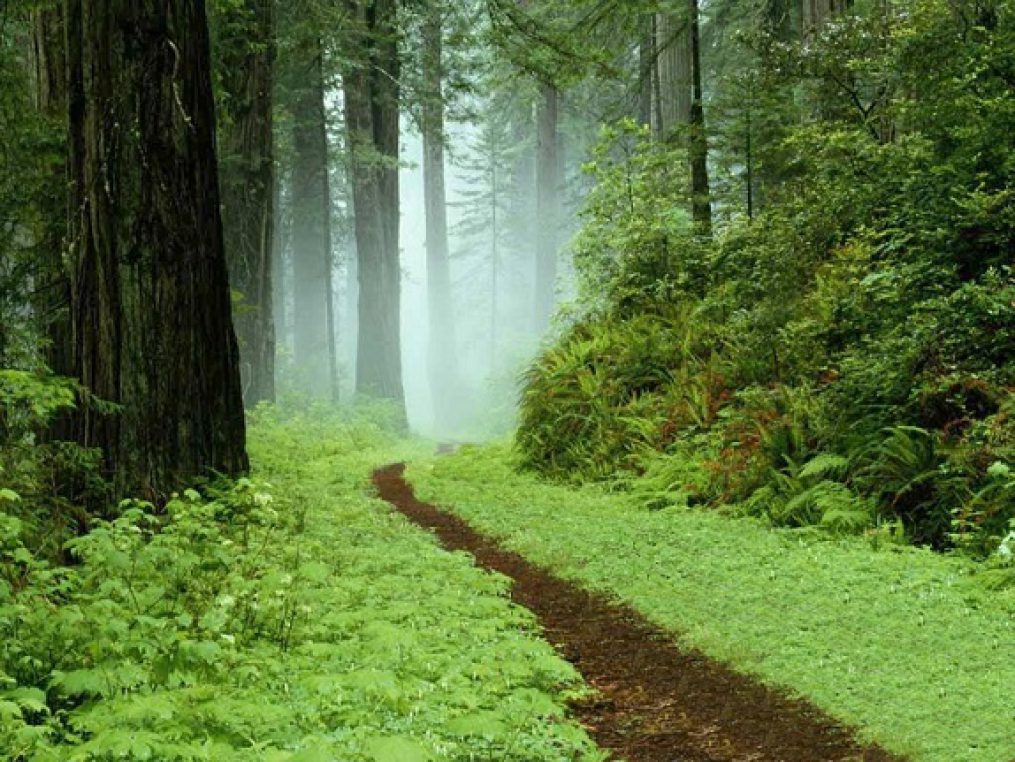 Diary of the journey on the path least traveled.. 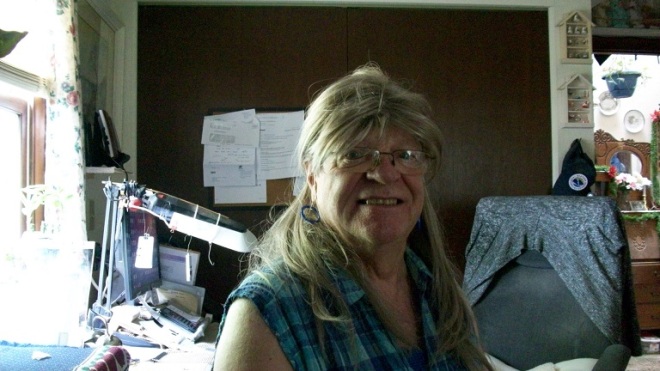 “Dying is merely the process of transferring from mortality to immortality, from one state of being to another state of being, from one dimension to another dimension, etc. depending on one’s personal beliefs… one should not dwell on the hereafter much or one will miss all the wonderful moments in the present…”

“There is no real ending. It’s just the place where you stop the story.”
― Frank Herbert

“You know it’s love when you want to give joy and damn the consequences.”
― Frank Herbert

“There are some people who live in a dream world, and there are some who face reality; and then there are those who turn one into the other.”
– Douglas H. Everett

Have been dealing with oppressive heat and humidity, along with an occasional prairie thunderstorm, the last few days, not getting chores and tasks totally completed, but have the important tasks taken care of… as I were puttering in the office, I looked out the window and saw a robin on the ground…. 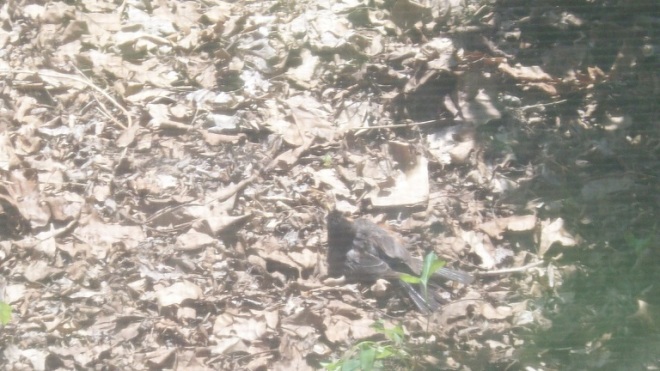 First I thought the bird was injured because the bird had the wing slightly spread out, then decided that were not the case at all… there were some cloud cover seconds before I took the picture and had a good breeze, so the robin was attempting to cool off… a short time after I took the photo, the robin took off in search of his destiny… 🙂
So, what does a old hippie do when it is too miserable (and possibly dangerous) to spend a great deal of time outdoors, well, I do neglected tasks and projects indoors… one such project is go to school… 🙂 in my case, learning Spanish… so, I open my mini laptop which is my school book,,, 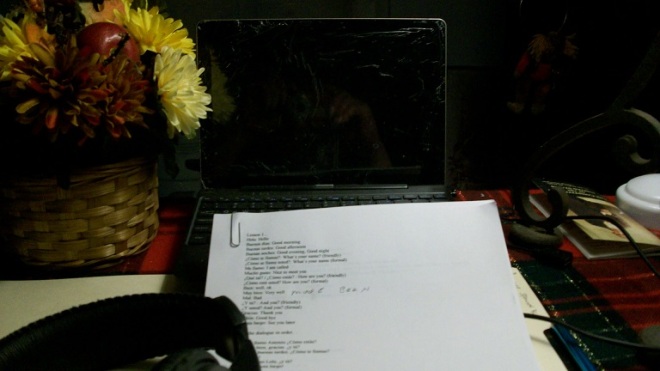 It has all the audio and text files needed to learn a good deal of Spanish… then I get out my notes…. 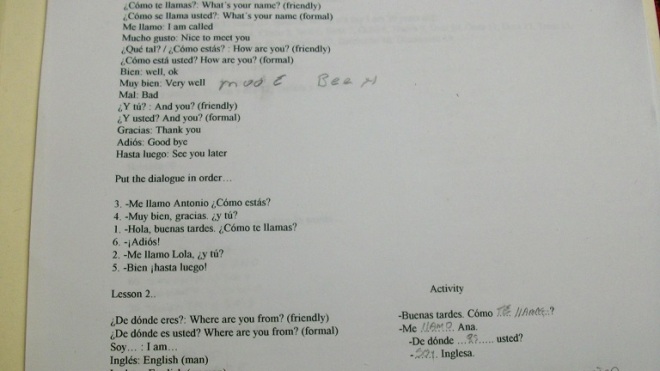 So, I am ready to study and learn Spanish, right?….. Nope!… I still need to set the mood, to create the right atmosphere…. Sooooooooooooooo, first I put my sombrero (purchased in Tijuana, Mexico many years ago) in place, along with my Cinco De Mayo necklace… 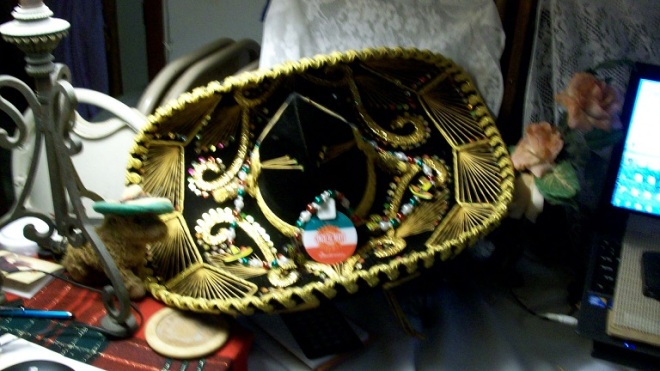 THEN, I turn on another PC, select James Last playing an appropriate Spanish song (Oye Mi Canto/Hear My Singing).. 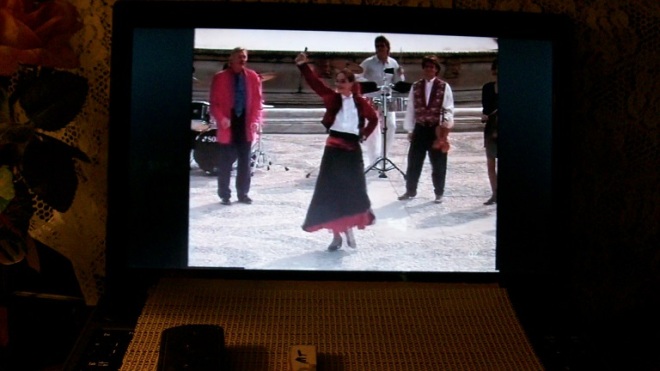 Now I am ready… bet you haven’t seen a classroom like that before, have you, Diary??… 🙂 well, this is not Spanish, but thought I would share another poem by my late friend, Chris Clark… it is about love..

The Man I Love!

He knows me
Better than I know myself!
And yet – in the World view of us –
We do not know each other!
.
He loves me!
(More than I love myself!)
And yet – as the World knows Love –
We’ve never touched each other!
.
He moves me!
As no other man has done;
Because – could the World’s eyes see –
Each of us IS the other!
(Chris Clark)

Well, I had better close for now, the pace may have slowed down a bit but still venturing on down the path least traveled with a pocket filled with memories/dreams, making new memories and chasing rainbows… but I shall return again one day, Fate be willin’ and the creeks don’t rise..

Well, Diary, I know with my love of music that I usually end my writings with some music that fits the thoughts of my writing… however, this time I will be a bit different… my late wife wanted a simple service at the gravesite, so when she passed away a few years ago (cancer), I honored her wishes… she loved roses and gardening as I, and I had a song (which is my favorite and I listen to often) selected to play at home when I returned from the services…. it dealt with roses, gardening and , as the way with all things, a time to say goodbye… the name of the song is; “The Last Rose Of Summer”… I will post the lyrics follow by a beautiful playing of the song by Andre Rieu…

“The Last Rose Of Summer”

‘Tis the last rose of summer
Left blooming all alone,
All her lovely companions
Are faded and gone.
No flower of her kindred,
No rose bud is nigh,
To reflect back her blushes,
And give sigh for sigh.

I’ll not leave thee, thou lone one,
To pine on the stem.
Since the lovely are sleeping,
Go sleep now with them.
Thus kindly I scatter
Thy leaves o’er the bed
Where thy mates of the garden
Lie scentless and dead.

So soon may I follow
When friendships decay,
And from love’s shining circle
The gems drop away!
When true hearts lie withered
And fond ones are flown
Oh! Who would inhabit
This bleak world alone?

4 thoughts on “Spanish, poetry and the last rose on the path least traveled…”